Andrea Bocelli In Concert is coming to Total Mortgage Arena in Bridgeport!

Andrea Bocelli In Concert will feature performances from Bocelli’s uplifting album Believe, a poignant and personal collection of songs, celebrating the power of music to soothe the soul, as well as a selection of arias, his beloved crossover hits, famed love songs, and music in honor of the Holiday Season.

As one of the most recognizable voices in the industry, and revered by fans internationally, Andrea Bocelli has been entertaining audiences for over 20 years, counting nearly 90 million records sold worldwide. In addition to his sold-out arena-sized concert events and record-breaking live-streams, Bocelli has shared his talents at major events including the Olympic Games, the World Cup, and Global Citizen. He has earned a Golden Globe, seven Classical BRITs and seven World Music Awards, plus a star on the Hollywood Walk of Fame. His 2018 album, Si, reached No.1 on both the US and UK charts.

Know Before You Go 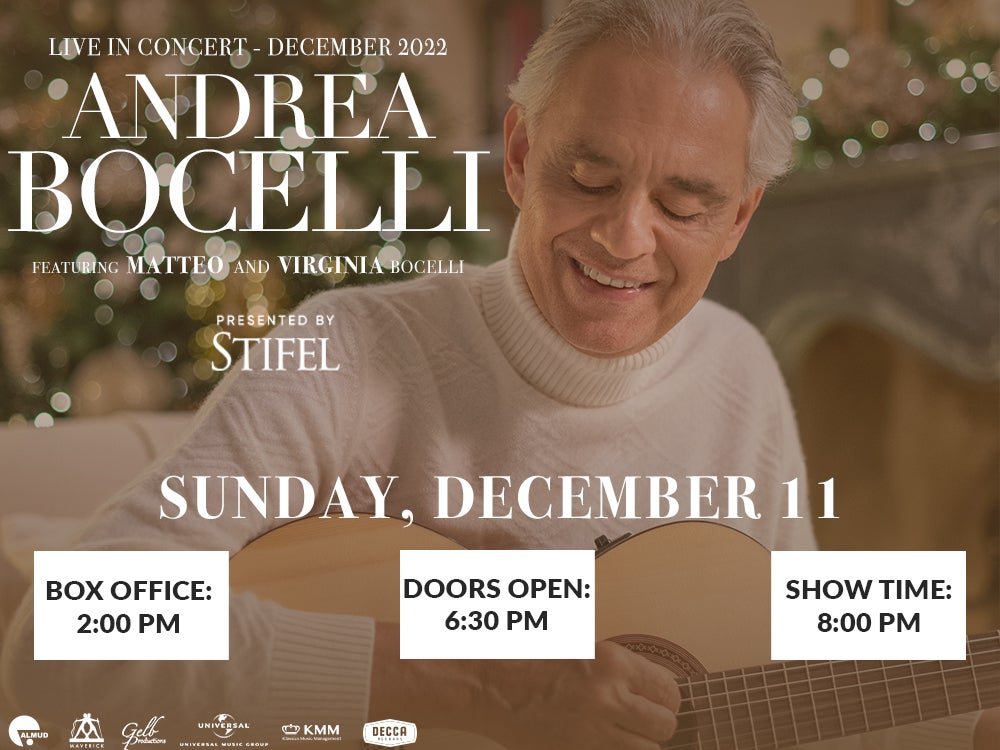 Total Mortgage Arena would like to advise fans that heavy traffic conditions are expected near the venue before and after the event.

Guests are encouraged to arrive early, carpool, or take the Metro-North Railroad New Haven line to the event to avoid heavy traffic areas.

Event day parking is located in the surface lots across from the venue located between Lafayette St & Broad St. Additional event day parking can be found in the Harbor Yard Transit Garage on South Frontage Rd.

For the safety and enjoyment of everyone at an event, anyone entering the Arena is subject to a reasonable search. This includes, but is not limited to bags, purses, coats and hats. We encourage all fans to travel light to help provide smooth entry.

All tickets for Total Mortgage Arena events will be delivered digitally and will be scanned from guests’ mobile devices. Guests should have their tickets pulled up when they arrive at the doors. Staff will also be on hand at each entrance to help guests scan their tickets, if necessary.

We now use a cashless experience for all box office, food, beverage, parking and retail purchases.

Whether it's a night out for a group of friends or fun for the whole family, Premium Suites at Total Mortgage Arena will provide the ultimate space for exclusive entertainment. Book your Andrea Bocelli suite here.